My son Benjamin is an aspiring screenwriter whose interests as a writer is in Sci Fi, Fantasy and what could be called New Age Adventure. His new project involves the concept of the Multi Universe or Multiverse theory. This theory postulated by theoretical physicists but originally taught by shamen and mystics throughout the ages theorizes that we bounce between different yet similar worlds and if we are perceptive and aware enough we can spot when we've entered a new and different reality. In the reality I must have entered in order to hear the new CD from New York's Tilted Axes titled "Music For Mobile Guitars" a world must exist where Robert Fripp from King Crimson and League Of Crafty Guitarists isn't a pioneering Prog Rock guitar player but rather a music director of a college marching band. Sounds strange? You ain't heard nothing yet. 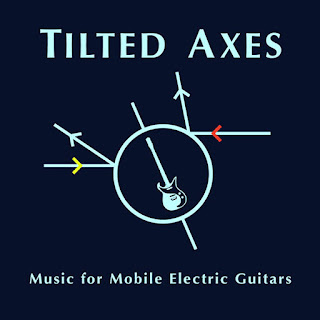 In this strange new world our band leader is a gentleman by the name of Patrick Grant and he leads his Prog/Art/Experimental marching band made up of local musicians on a procession route through city squares, centers of transportation and indoor structures like museums. The city, which may be his native New York although he's also led the band through the streets of Detroit and Düsseldorf, Germany, usually invites Tilted Axes as part of a larger arts festival or event such as New York's "Make Music Winter" in 2011. 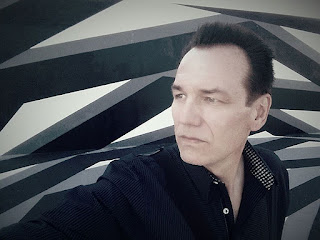 The procession is accompanied by posters and placards which let the public know more about the event, sponsors, the hosting organization and its purpose. Flexible in number, Tilted Axes adapts itself to the environment or occasion and feeds on the energy of a constantly shifting audience. Tilted Axes cuts musical pathways through the urban landscape, turning neighborhoods into sonic narratives. As a form of street theater, the ensemble brings potent, ecstatic riffs and an element of surprise, to an unsuspecting public. Tilted Axes is always in motion; striding in, rocking out, and moving on. Being as experimental as one might assume since they're an ever changing line up of local musicians, the music is instrumental and involves a degree of improvisation. 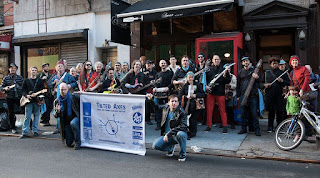 This is a very unique project and one that is constantly changing therefore I must assume the music on "Music For Mobile Guitars" is probably consisting mostly of Patrick Grant and a core group and may not accurately represent any given live performance. How could it, especially using local, unknown guitarists at every performance? The "marching band" members carry small amplifiers strapped to them and have a few weeks before the event to learn the planned repertoire while Patrick himself arrives a week ahead of time to conduct rehearsals.

I'm wondering if his band name, Tilted Axes, is a reference to the New Age believe in the Earth's tilting on its axis which allegedly caused the end of the last Ice Age and led to the loss of Atlantis? 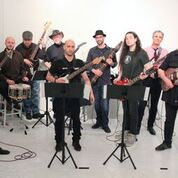 According to his most impressive bio: Patrick Grant is a composer/performer living in New York City and creates music for a wide range of media. A native of Detroit, MI, he moved to NYC in the mid-80s where he studied at the Julliard School, worked on the production team for composer John Cage, and produced his first recordings at the studios of Philip Glass. He spearheaded the compositional element of an international project for the Millennium which had him working with Billy Joel and Quincy Jones. Interest in world music brought him to Bali three times to study the gamelan which  manifested itself in his work through the use of alternative tunings, ensembles with multiple keyboards, and in his work with Robert Fripp & The Orchestra of Crafty Guitarists. 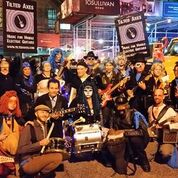 He is host of the internationally acclaimed podcast "Strings and Things". Grant is a recipient of the 2012-13 Con Edison Musicians' Residency: Composition Program at the Turtle Bay Music School administered by Exploring the Metropolis. In 2012 and 2013 he received ASCAP Plus Awards for continued musical excellence. Recently, he performed as music producer and coarranger of NYFA Fellow Joseph Keckler's "I am an Opera" for a month of sold-out shows at Dixon Place in NYC and beyond.

He is the creator of International Strange Music Day (Aug. 24th) and the electric guitar procession as a genre. Recently he was granted rights from the Beatles' publishers to create a set of variations on Strawberry Fields Forever for chamber ensemble and rock band. He has created scores for theatrical visionaries The Living Theatre and Robert Wilson, and music for installations at the Louvre and the Musée du Quai Branly in Paris. His music has been applied visually through seven collaborations with the artist Kehinde Wiley, scores for feature documentaries, and music tech seminars each semester at the NYU Film School.

Within the last year his music has been performed extensively by theater troupes in Brazil, appearing in the major cities and international festivals there. In 2009, with radio producer Jocelyn Gonzales, he created the MMiX Festival of Interactive Music Technology in NYC, an
event co-sponsored by Ableton (LIVE), Cycling ’74 (Max/MSP), and WNYC Radio.

In December 2009, he music directed the European premiere of his electronic realization of the Morton Feldman / Samuel Beckett opera “Neither” in Vienna. In 2010, Grant returned to Europe and Brazil for new works in concert, theater and multimedia and created H2Opus: Fluid Soundscapes by Multiple Composers for Make Music New York 2010. Grant also produces content for the new music blog The MMiXdown and is a co-director of Composers Concordance Records.

He has created musical scores for the Cornell Gamelan Ensemble and the Margaret Jenkins Dance Company in San Francisco (a piece called "the strangest and most ravishing dance of the year" by the SF Chronicle and nominated for Best Dance Score of 2003 by the Isadora Duncan Dance Awards). His work often involves elements found in the natural and physical sciences (Genome: The Autobiography of a Species).