Lucy In The Sky With Diamonds Part 2

I decided to paint the lyrics to The Beatles’ Lucy In The Sky With Diamonds as a scene from a Victorian Era amusement park. The first verse involves floating in a boat on a river. Not sailing or paddling but drifting as in “everyone smiles as you drift past the flowers...” You aren’t traveling to go anywhere specific but floating along, riding for the sake of the ride. There are flowers “so incredible high”, and a “bridge by a fountain” which could span the river. Each verse features a different amusement park ride. The river boat ride, the taxicab ride and finally the train ride. In each verse the narrator is describing something that is not headed anywhere in particular. The “newspaper taxis appear on the shore”, they don’t arrive at the shore, they’re already there waiting for you in your boat ride. You don’t “get in the back with your head in the clouds” to be driven away, just getting in back and having your head in the clouds is enough to make you “gone”. Having one’s “head in the clouds” means lost in thought or in one’s imagination and could also mean having your head in “clouds of dope smoke” as well. In the last verse you “picture yourself at a train at a station”, again, the train isn’t moving, it’s waiting for you.
I chose to paint the “newspaper taxis” as a kiddie car ride. The center of the kiddie ride is the mechanism that rotates the cars in a circle and is often painted with scenery to simulate the landscape going by. I painted this area as a newsstand as often newspaper stands double as taxi stands. If you’re going to be riding for a while why not buy a newspaper or a magazine to read on the trip? Hence the “newspaper taxi”. The canopy that covers the ride I painted as a blue sky with billowy white clouds so getting in one of the ride’s cars would put your “head in the clouds”. The line “rocking horse people eat marshmallow pies” I painted as a carousel ride with the carousel horses looking like rocking horses, another example of simulated transportation. And the diamonds in the sky I pictured as a gondola ride above the park with the gondolas looking like diamonds hanging from the cable like lavalieres.
Lucy is the only human character I put in the scene so that she would stand out among the park’s various visitors who are animals dressed in Victorian era costumes. This is a Victorian children's book illustration like from Beatrix Potter or Lewis Carroll. Lucy appears in the extreme foreground so you can seen her kaleidoscope eyes, on the bridge by the river calling out with the sun in her eyes, at the turnstile at the train station, in one of the gondolas in the sky and as a shape in the clouds. 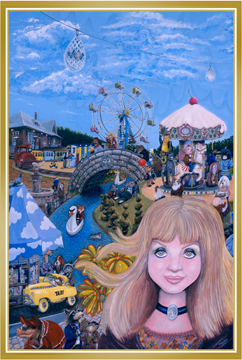 Lucy In The Sky With Diamonds Fine Art Prints

So, the question becomes; did John Lennon realize he was writing a pretty accurate description of an acid trip or was it all subconscious? Picturing yourself, which is what he asked you to do, you’re not really there, is asking you to use your imagination which is taking a step away from “normal” consciousness. Then he puts you on rides that go nowhere except maybe in a circle and exist only for the pleasure of taking the ride and perhaps learning something along the way. If this isn’t a good description of a psychedelic experience, I don’t know what is.


What do you say?  Please leave a comment below.