A few years ago I had the opportunity to paint at Universal Citywalk at Universal Studio as part of their tourist attraction. Since Rock & Roll is my muse I wanted my paintings to reflect my passion (obsession) but I’m not fourteen years old and didn’t want to paint portraits of Paul MacCartney or Mick Jagger. What I wanted to paint was the music itself. I decided to illustrate song lyrics. I’ve quite a bit of experience illustrating song lyrics as PaperCuts, The Illustrated Lyrics Magazine, was created to illustrate my band’s songs and I’ve produced a few animated music videos which were designed to illustrate the words rather than a cartoon band performance.
The first painting I did was King Crimson’s In The Court Of The Crimson King, one of my all time favorite songs. This one was relatively easy as the lyrics describe the scene of a Medieval kingdom’s courtyard. Even the album’s subtitle; An Observation by King Crimson, describes its very visual aspect. But the next one took years to figure out how to paint.
The next painting I wanted to do was The Beatles’ Lucy In The Sky With Diamonds. One thing I required from my paintings of song lyrics was that the painting had to make sense as an image even if the viewer had no idea it was illustrating a song. The Court Of The Crimson King was easily identifiable as a fantasy kingdom with the inhabitants going about their day but Lucy is very surreal. Alan Aldridge had already done a great painting of Lucy In The Sky in his Illustrated Beatles book although it was a jumble of weird, disjointed images that didn’t make any sense out of the context of the song. How could I do a different, more literal version?
I used a technique I’ve used in the past. What I do when I have a creative problem is imagine that the work is already finished, that it exists already but in another dimension (of time). Therefore it is not a matter of having to think of how to do it but only to try and “remember” what it looks like. I used this technique to come up with a name for my illustrated lyrics magazine years earlier. Names like “Rocktoons” seemed the most logical choice but just didn’t seem like what the magazine was really called. Remember, I work on the presumption that the magazine already has a name and when I remember it there will be no question that is it’s name. when “Paper Cuts” jumped into my mind I instantly knew that was its name. Paper, since it’s printed and Cuts as in album cuts. All I needed to do is tell myself to “remember” how I painted Lucy In The Sky With Diamonds and it will occur to me just like remembering where you left your car keys.
I hanged “The Court Of The Crimson King” in the living room for inspiration and every time I’d walk by I’d look at it and think to myself, “How am I going to paint Lucy”? And I’d hear a voice (my voice) answer me; “Disneyland”. 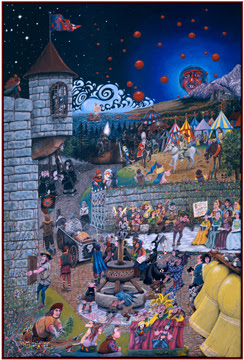 “Yes, the King Crimson painting was Disney-ish, but not exactly Disney-land,” I’d say back (yes, I talk to myself). But every time I’d see it I’d say to myself; “Disneyland”.  “Okay, it’s a fantasy kingdom so I suppose that’s very Disneylandish but so what? I need to know how to paint Lucy!” “DISNEYLAND!” came the emphatic answer once again. Then it hit me. Of course, DISNEYLAND! Lucy In The Sky With Diamonds is a ride at Disneyland! No, wait.. not a ride, it is an amusement park!”

What do you say?  Please leave a comment below.