To say I'm apolitical is a great understatement. I really can't stand politics. Of all the elective classes you can take in junior high school; metal shop, auto shop, electric shop, wood shop, home ec, agriculture, creative writing, music, etc., the political science classes and the campaigns for Student Government are the most unchanged from later in life, real world experience. In all these other vocations people grow, mature and develop skills and talents that serve them well as adults but the little wanks that were in Student Government in Jr. High are just exactly like the grown up politicians that ask for our vote today. This year's presidential campaigns are at the Jr. High School level and that's only because there are no Poli Sci classes in grammar school. It's a huge embarrassment and frightening. Except that I'm at an age where I've lived my life so I'm actually finding all of this extremely entertaining hense BEST ELECTION YEAR EVER! 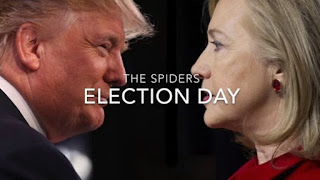 Of course if I were younger and had the whole rest of my life ahead of me I might not be so flippant. Case in point: The Spiders, an Alt Rock trio from New Jersey. The Spiders aren't taking this election season so well. In fact, they seemed really pissed off about it. Anger often is something that masks fear and it seems The Spiders think we may have something of which to be afraid.

Now I come from a time when young people communicated through music and a "single" was our version of a press release, a three and a half minute "sound bite" and The Spiders' new single, "Election Day" is very much in that time honored tradition. Back in my day the choices were very clear; we wanted to end the war in Viet Nam, end the military draft, let minorities and women feel they're part of America too and perhaps ease up a little on sending people to prison for decades for smoking a joint. When I turned eighteen years of age a law had just been passed that lowered the voting age from twenty-one to eighteen. We Baby Boomers were the largest, wealthiest, best educated and most politically informed generation in history and we seemed also to be the most united in our beliefs, tastes and attitudes. Maybe young people don't bother to vote but when young people have been in the street protesting and demanding the vote, when a young man's actual life was held in the balance due to the military draft and a disastrous war, when that hard fought right to vote was finally won, you bet we'd vote. We'd vote en mas, after all, we wanted to be heard, to have a voice. And we were united! Yes, in 1972 George McGovern, the Democratic presidential candidate who was running against GOP Richard "Tricky Dicky" Nixon (who not only had to resign in disgrace but whose vice president, Spiro Agnew had been forced out of office due to corruption charges even earlier), was absolutely destined to win the presidency in a landslide!

Except it was Nixon who won. And in a landslide.

How the hell did that happen?!

Now we're looking at a presidential election between the lady whose husband had been president and had cheated on her and the boss from hell from the TV show, The Apprentice. This is A LOT more to both of these candidates. A lot more positive things about Hillary Clinton and a ton more negative things about The Donald but I see it all from the POV of someone who lived through the murder of a president, the resignation in disgrace of a president and a president whose administration was one scandal after another. Trump calls Clinton "Lyin' Hillary" but Gerald Ford was part of the Warren Commission, so there's that.

What is truly troubling about this campaign is the attitude being fostered among the young people as reflected in The Spiders' song "Election Day". I'm not sorry they feel the way they do, I'm sorry they've been made to feel that way by a system where only the unpopular, obnoxious kids are the ones who even want to grow up to be president any more. I was all for Barrack Obama because I felt he had a legitimate reason to want to be president; he would be the first black president of the United States. He represents a huge step toward actual equality. I was also tired of being "The Man" because I'm an old white guy. Obama had honorable reasons to want to become President. Hillary Clinton may also have the same incentive as she would be the first woman elected president but why would anyone other than a potential "first timer" want to be president? The job sucks! The ageing alone isn't worth it.

Okay, I'm ranting. If you like Seventies style guitar driven, hooky hard rock (kinda of Roadhouse Rock) then give a listen to The Spiders' Election Day. It is unfortunately a very appropriate anthem for the election of 2016 and please go vote this November for someone. If nothing else go vote for Prop 64 to legalize marijuana in California so if things really go to hell we can at least get stoned and forget about it.

Headlining The Spiders is lead guitarist Nick DeStefano who has performed throughout North America everywhere from the Stone Pony in New Jersey to The Troubadour in L.A. He has appeared in two award winning videos on MTV and appeared on compilation CDs in the company of the likes of the Smithereens, Glen Burtnick, and Joe Lynn Turner. His recording “Just Say No” included appearances from musical veterans including Donnie Kisselback of Alice Cooper, James Lewis of Trans-siberian Orchestra and the Miami Horn
Section.